I won't lie and say I need an excuse to eat Oreo for breakfast, but if you're looking for one boy do I have some good news! The folks at The Bagel Nook have answered your prayers and created an Oreo bagel. Now you can go out in public, eat your Oreo and have it look like a responsible-ish breakfast without being judged (too much). 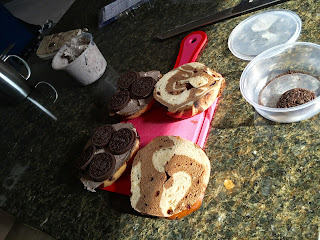 Bagel: The chocolate and vanilla swirl are very attractive, but don't really stand up to the flour pow that is a bagel. There are chocolate chips mixed in, but they don't really add much and I'm not sure if bigger chips would help. If someone was eating the bagel without the Oreo cream cheese and Oreo cookies, this bagel isn't anything special. An Oreo cookie crunch on top (think Panera Cinnamon Crunch Bagel) of this bagel seems like it would be pretty tasty.

Cream Cheese: The Oreo flavor is subtle and welcoming. This cream cheese would work well with a lot of other bagels.  Maybe a bit more Oreo would make this even more stellar, but that is easily fixed by breaking up some extra cookies. 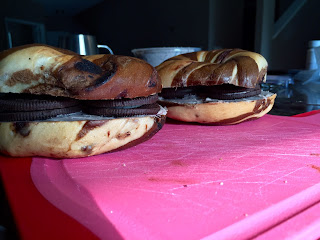 Full Bagel Oreo Sammich: Have you ever wondered what diabetes tastes like? Well, look no further! Picture this...Oreo bagel, Oreo cream Cheese and Oreo cookies. All of the flavors mix together and the Oreo cookies are the ribbon that ties this delicious present together. This is no doubt an Oreo sammich disguised as breakfast. The next time we do this we will be breaking the cookies up a bit and putting it on the cream cheese layer. The whole cookies were good, but the broken up cookies would've been more evenly spread and easier to bite into.

Side Note: We also tried the following from the same bakery-

Cocoa Puff Bagel: The Cocoa Puff on the outside of this bagel really makes the flavor more extreme. I just almost wish there would've been more.

Fruity Pebbles Bagel: Just like the Cocoa Puff, the outside of this bagel with the Fruity Pebble cereal is really pleasant. They put a brushing of some of the cereal, so it's lightly fruity and sweet. Again, I just wish there was more of it. Of all the flavors I shared with friends, this was actually the overall group favorite.

Nutella Cream Cheese: Need I say anymore? This cream cheese has the perfect amount of Nutella mixed in. I cannot recommend this enough.

Birthday Cake Cream Cheese: This was my favorite as I tried it on every bagel and it worked well with all of them. There are chunks of frosting in the cream cheese and the flavor slightly resembles cake. I do wish it were a bit more sweet, but it has to be able to stand up against the bagel, so I get it.