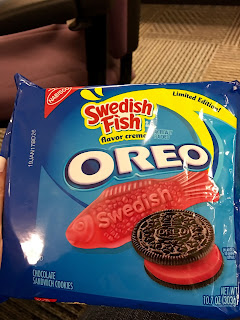 There are few candies on this planet that I have little to no restraint when devouring, and Swedish Fish is definitely high on the list. I can have one M&M and stop eating them no problem, but Swedish Fish...sign me up for diabeetus because I am diving head first into the package and not coming up for air. There is just something about the flavor and texture that make them seem irresistible to me. The folks at Nabisco apparently feel the same way I do and decided to make a Limited Edition Swedish Fish Oreo.

Initial Smell: Have you ever wanted a Swedish Fish candle? Yeah, me neither and these cookies don't help that. Once upon a time I bought Swedish Fish flavored vodka and the bottle broke...so my entire kitchen smelled like Swedish Fish for MONTHS. This gives me flashbacks of that and makes my skin just crawl. The smell literally jumps out of the package and all but says ROAR! "OH GOD!" was all I got muster.

Whole Cookie: Before I even start, I just want to say...chocolate cookie? Really? Why!? I haven't even tried these, but in my Oreo expertise I feel that they should've gone with the vanilla cookie. Give the creme a chance to stand up against the chocolate wafer! Suddenly I am the voice of the cookie-people, I don't know when that happened, but it did. Now that I got that off of my chest, time to give these a whirl. Yep, why in world did they do the chocolate cookie!? The creme obviously has some of the Swedish Flavor but it fails to swim up stream (see what I did there?) and jump out of the chocolate river (I did it again).

Half Cookie: This definitely makes me like these more. The creme isn't being held back by the chocolate and actually gets to shine through. I still wish there was just a bit more flavor. I'm also really big on the texture of the candy and I find that I actually really miss that when it's cookie form.

Creme Only: For as much as these cookies smelled like Swedish Fish I expected to borderline feel assaulted with flavor, but I found myself a bit dumbfounded and asking "that's it"? Maybe I got myself so worked up because the flavor drop-kicked my nose that when it wasn't POW I was left sad and confused. I am still, however, left wondering if this lack of flavor explosion is a bad thing, but part of me still wishes they would've pumped up the flavor jams.

Overall: Nabisco if you read this: Why did you pick chocolate wafer? You took something that was potentially great and made me sad. Are these terrible? No. Will I be hunting them down to buy some and put in my secret stash (it exists, don't judge me)? No.

Bonus: I actually got these from a coworker, so I got to see a bunch of my fellow coworkers taste them. The majority did not like, but there was one super fan. He actually called people "closet fans" as he couldn't believe more people didn't say they liked.
Also, in talking with another coworker there should totally be a tiramisu flavored Oreo. How amazing would that be?
Labels: Nabisco Oreo Swedish Fish Swedish Fish Oreo