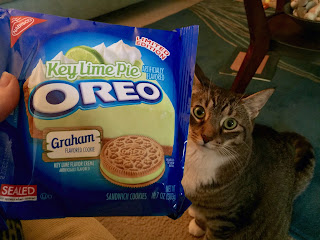 Key lime pie seems to be one of those things that people are a bit picky about. Some bakers seem to nail the perfect balance between lime and graham cracker....while some make you have flashbacks of trying your first lime as an kid (oh, you didn't get tricked into that? lucky). The bakers at Nabisco decided to give this flavor a crack and released Key Lime Pie Oreos. I'm a flashback victim with lime PTSD, so I recruited my boyfriend...a proclaimed lover of key lime pie....to help with this taste test. Okay, fine...he was the one that asked "is it time for Oreo, yet?" with the most hopeful face ever.

Initial Smell:  I opened the package and instantly proclaimed "OH WOW!" as the lime flavor reached out, smacked me right in the nose and made my fillings tingle. While dealing with my recent assault, the key lime connoisseur spent much longer wafting in the aroma and determined the scent to be "lime Skittle...unmistakably limey with a bit of graham cracker action."  I don't know if I would buy an air freshener that made my fillings tingle, but the "graham cracker action" certainly grew on me.

Whole Cookie: First bite and you're certainly not left guessing when the lime flavor will make it's grand appearance to your taste-buds.There is almost too much lime flavor for me here. A little less of this lime boom boom POW and it would've let the graham cracker shine through.  Each bite I took put me in deeper thought as to whether or not I even really like key lime pie to begin with, or am just getting my pies mixed up. While I was recalling all of my pie memories, my boyfriend started his taste test and said these are perfect, but by the end said they were a bit too limey. (Please note that the rest of the test is just me, as these carb bombs are anything but diabetic friendly)

Half Cookie: My PTSD was in full swing as I went in for this test. With my face in complete cringe-mode I went in for the kill. I instantly discovered that it wasn't as limey as the whole cookie and actually kind of enjoyable. My brain went into a spasm of questions. "What in the world is going on here?" "How was this not a lime bomb!?" "Did they infuse the graham cracker cookies with lime?!"

Creme Only: After the last test I was actually quite curious to see how this went. This has to be so offensive that I throw in the towel, right!? Nope, again...not as limey. I've never been so surprised by a cookie...

Graham Cracker Cookie: Now I normally throw these cookie pieces away, because let's be real...the creme is the best part (argue all you want, you're wrong...). I had to know if these cookies got pumped up with lime flavor, though. NOPE. These soaked up a little lime flavor but not enough that I would write Nabisco and give them a piece of my mind. I will say that the graham cracker flavor was way too light. They need to double this flavor...especially when dealing with these lime bombs.

Overall: For those of you that tried the Limeade last year, these reminded me of that but were a bit more mellow...which is more than welcomed. I still say there is a bit too much lime flavor and not enough graham cracker flavor in the cookie. When you think of the perfect key lime pie, the crust is one of those elements that just pulls everything together in harmony. I am very blown away that the more I ate the less limey they got, so maybe I just need to eat the entire package in one sitting? Sounds like a decent excuse to me.