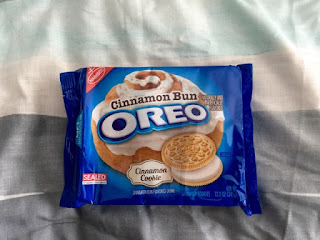 There are honestly very few breakfast foods that get me overly excited (picture kid on Christmas), but cinnamon rolls are definitely one of them. The perfect gooey center with the equal amounts of cinnamon and icing...oh my word, give me a pair of sweatpants and one of those little bites of joy. Anyway..the boys and girls at Nabisco are also clearly part of the cinnamon roll fan club and decided this would be a solid choice for one of the limited edition release.

Initial Smell: Now I know we've all experienced going to the mall and being bombarded with the smell of fresh cinnamon rolls (thanks, Cinnabon). The second the smell hits your nostrils you toss aside your diet and dive into one of these delectable treats. Go ahead, try to deny it...I won't judge. To me this scent had the same effect. They weren't quite the same level of smell as IKEA (oh sweet baby Jesus does that place smell good), but still tantalizing nonetheless.

Whole Cookie: After the smell I can honestly say I haven't been this excited to try one of these limited edition Oreo cookies...and that's saying something!These should be illegal. You very well could find me in rehab because of these tasty little bastards. The moment you put them in your mouth you are welcomed with the most pleasant cinnamon burst. Not long after this, the icing starts to creep in and both flavors blend to, well, heaven.

Half Cookie: This is the first cookie in history that I ate the discarded piece after the taste test. The cinnamon wafer, while not very powerful as a single, is the perfect amount to compliment it's partner. Don't break this couple up, they need each-other (think of the kids!).

Creme Only: I'm sure all of you have killed the rest of the icing while making...anything. Go ahead, you can put on that "I would never" face, but we all know you're lying. This creme made me feel like I was doing just that. It's not as sweet as some icings I've demolished in my life (I used to eat frosting from the can with a spoon...yep, I know...terrible), but it's certainly pretty tasty. I still ate the discarded wafers because they're that good. This should make Matt happy as it's usually a wafer graveyard when I'm completed with a test and sometimes forget to throw away.

Overall: Whoever came up with these should get a bonus! And I'm not talking "hey, good job...here's your Jelly of the Month Club membership". These are so damn tasty. I know this review is super late (blame getting settled into the new house), but if you can still find these...GO! NOW! MOVE IT! GET TO THE CHOPPA!

PS: The first single wafer I ate was definitely devoured while singing "All the single wafers...all the single wafers" to the tune of Beyonce. And then that became the theme song for this review, so it was sung the entire time. Okay, you can judge me a little for that one.

If the folks at Nabisco want to continue their fall down the rabbit hole, they should look into doing a doughnut flavored Oreo. Maybe we should start a petition?