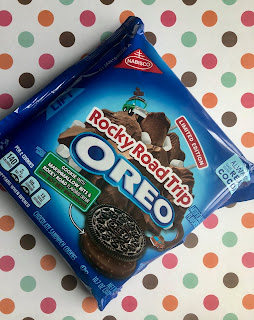 Summer time in Northern Michigan is more than what Kid Rock squawks about in that song we've all heard so many times we almost wish it was fall.  Yes, it's mostly Mother Nature in her wonderful glory, but it's also ice cream shops. You can't go to one Michigan tourist town without finding a cute little ice cream shop. The one flavor that all of those shops seemingly have in common is rocky road (and mackinac island fudge, wink wink Nabisco). Apparently our friends at Nabisco also traveled to one of these ice cream shops, because this years main summer feature is Rock Road Trip Oreo. This really seems like it's going to be another chocolate, on chocolate, with a side of chocolate cookie, but I'm doing my best to be optimistic.

Initial Smell: The smell heavily reminds me of the Hot Cocoa Oreo, but with more of that marshmallow pow that I wanted. Who doesn't love extra marshmallow?!

Whole Cookie: Yep, this cookie is exactly what I wanted out of the Hot Cocoa Oreo. The added marshmallow and soy nut really improve the overall flavor and texture of this cookie. I wouldn't say I've eaten a lot of rocky road ice cream in my life, but I've definitely eaten enough (are we all really that surprised?) to know that these are a good cookie version.

Half Cookie: For whatever reason, I thought that the marshmallow was in the creme and missed that the texture was the soy. The cookie has ribbons of white mixed in, so I don't have a really great excuse for being this dense. Moving along...I like that removing this wafer allows the soy nut pieces to really pop more, but overall I wouldn't say that this wafer removal is necessary. 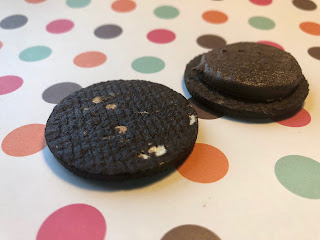 Creme Only: Again, I super appreciate the addition of the soy into the creme as it gives it that added flavor and texture. Am I going to start a fan club for this creme and start having random day dreams about it? Well, no...that's just absurd and pretty darn creepy, but I would eat this like Nutella...on a croissant like a good tubby...

Wafer Only: With Nabisco upping their wafer game, I feel it only fair to review these as well (unless there isn't anything special). The added marshmallows to these wafers isn't only visually appealing, I feel it does change the texture and flavor a bit. My first couple, okay maybe like three, seemed to have more of that dried marshmallow chew, but the more I ate the less I could really tell. I wouldn't say that this is first place winner in the wafer olympics, but it gets a participation certificate and invited to the pizza party with the team.

Overall: For being yet another fangirl of chocolate cookie, these are actually pretty good. With the wafer and creme having some adding elements, I would definitely say give these a shot.
Labels: Cookie cookie blog Food food blog ice cream Nabisco Oreo Rocky road rocky road ice cream rocky road trip oreo