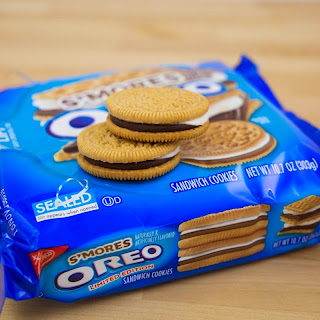 S'mores are considered a summer staple in my book. When I go camping I consume more s'mores than the average five year old, guaranteed. I would by lying if I said I didn't make them my breakfast, okay fine lunch too, on multiple occasions while sleeping in the great outdoors. Now I understand that how the marshmallow is an area that divides everyone, but I'm on team "nice golden brown" opposed to "charred beyond recognition". That's right, I said it! Go ahead and light your pitchforks! I'll be over here enjoying my s'mores with marshmallows toasted to perfection...

Initial Smell: Right off the bat you definitely get the smell of graham cracker and chocolate. The sweet of the marshmallow is last, but it's definitely pleasant. The only thing missing seems to be that toasted smell that is generally associated with s'mores. I feel like the graham cracker is so overpowering, that the toasty scent wouldn't come through even if it were there, though.

Whole Cookie: I picked up the first cookie and instantly had some marshmallow stick to my finger. This is a good sign, I hope. Welp, these are s'mores. The graham cookie is different and very tasty. The creme is extra soft in these, which is a nice change...makes everything blend easier and more quickly. The only thing missing is the chocolate oozing out the sides and the crisp sugar that forms on the marshmallow during roasting. Dare I say little bits of this in the creme would've been divine? Would've probably been difficult, but hey, a girl can dream.

Half Cookie: You really lose a lot by taking away one of the cookies, which is honestly a bit surprising as most of the other cookie flavors
are so overpowering. Everything in this cookie works in harmony and plays a crucial role in the overall flavor profile.

Creme Only: Due to the fact that the graham cracker cookies really pull everything together and make this the s'more, the creme really is only a chocolate and marshmallow delicious bomb. I really do enjoy this, though. Neither flavor felt like it was in a competition to prove it was stronger than the other. That nice blend was rather refreshing considered some cremes have been a flavor punch that lasts for days.

Overall: If you like s'mores, you'll like the S'moreos (they really missed an opportunity here). I honestly wouldn't change a thing with these. Eat the whole cookie and enjoy. Maybe even roast a fresh marshmallow and use these as a s'more?